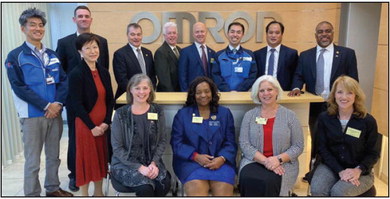 Marion economic development director represents community, state on trip to the Land of the Rising Sun

“The invitation came out of the blue and it didn’t cost the city of Marion or the Chamber of Commerce a dime,” said Brick.

Brick found an invitation in her e-mail in early October from the Japan Foundation’s Grassroots Exchange Network – Japan (GEN–J). The free trip sounded to good to be true, so the chamber president checked the program to see if it might be worthwhile. She heard a great review from Ben Walters at the Arkansas Economic Development Commission, who also made the trip, and learned the GEN–J program was intended to establish cultural relationships between the United Sates and Japan.

“They believe business and economic relationships will follow a cultural exchange relationship,” said Brick. “As part of the application I had to write what the trip would mean to me and the community.

I cited Hino as our largest employer and that it would help with my interactions with Hino leadership and also their visitors from Japan.”

The two-year program began in 2018 to deepen the understanding of Japanese culture and language.

Its main purpose has been to strengthen the collaboration between Japanese companies operating in the United States and local communities. Japanese participants were also sent to the Midwest and south.

Brick said the biggest part of the tour group came from Georgia and dignitaries from throughout the south.

“A third were from Georgia, and it turns out that Georgia has the highest number of Japanese companies of anywhere in the U.S.,” said Brick. “Everyone from Georgia told me so; they all knew the company line. There were state senators and state representatives, the Texas secretary of state, a mayor, and several economic development and chamber people.”

Gen-J treated the group with airfare, lodging, travel in Japan, and a 66,000 yen per diem.

“There were planned meals and the per diem totaled about $600,” said Brick.

She was impressed with the cultural tour, which included a trip to a temple, flea market, and a bullet train ride to Kyoto that including capturing a picture of Mount Fuji.

“It’s a fish that is poisonous,” said Brick, “but apparently they knew how to fix it, because I didn’t die.”

Another evening, Brick attended and official dinner with the Kyoto Charter of Corporate Behavior, an organization she likened to the chamber of commerce.

The business trip to Kyoto included a visit to the Omron Corporation. The company is engaged in making components for ATM machines and turnstile gates.

“It was beautiful facility, very clean and they employed about 200 people,” said Brick. “They used a lot of material handling robots and they were very ergonomically correct in the way they designed work stations for efficient and limited motion to reduce worker injuries. It was clean an quiet.

“They talk about the same issues we have. They have an aging workforce. They have an incredibly low unemployment rate of 2.2 percent. They have difficulty finding employees as well. People will work for a company and stay for 40 years, like we used to do in the United States.”

Brick bought home two big-picture takeaways from Japan, one cultural and one business-related.

“Everyone is so polite and pleasant, everything is clean and serene,” said Brick. “I never heard a horn honk and Tokyo is 13.1 million people. One time we heard an emergency vehicle siren, that was it. There is not litter or litter laws. Everyone takes their trash home in a bag.”

The green fields in Marion and Crittenden county fit the ideal.

“Japan is the size of California with 60 percent mountainous and can’t be settled. Its a small space for so many people. So they need this vast expanse of land we have in the Midwest and south to expand business. They said it makes so much more sense to make something here in the United States that will be bought here in the states rather than making it there and shipping it over here.”

The trip already opened new economic development opportunities form Marion. The Center for Professional Exchange invited Brink for an audience with the Acting Counsul-General of Japan based in Nashville to hear the Japanese dignitary and engage in a panel discussion at the University of Memphis this week. The meeting provided a networking opportunity and will examine workforce development issues along with logistics and supply chain management.