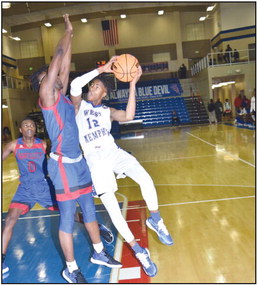 Except for a couple of players who played low-leverage minutes last season, the Blue Devils were mostly unrecognizable.

Except for one vital piece. Senior Chris Moore, already a three-time all-state pick who is one of the top 75 seniors in the nation, and who is a few days away from revealing his college choice, had a rather quiet night offensively, but on defense he was a game-changer in leading the Blue Devils to a 56-48 victory over Bartlett.

Moore, who spent a lot of minutes on the bench in the second quarter, scored a modest 10 points, but he snared 13 rebounds, blocked 6 shots and altered countless other shots and passes in the interior.

“I played Chris more than I wanted to tonight, but I got him a really long break in the second quarter,” said Brown. “I was really going into it with the mindset I wasn’t going to play him much tonight because it was a benefit game. But he really impacted the game on defense. Chris is just so active and he has a high motor.”

The Blue Devils have a quick turnaround as they play their regular-season opener Thursday night at home against Little Rock Mills. It will be a boys-only contest.

The play was sloppy at times, but the Blue Devils were in control the whole contest against Bartlett, running up a margin of 15 points with 5:52 to play in the game before the brakes were put on.

“Overall I was pleased,” said Brown. “We kinda leaked out on defense a few times and gave Bartlett about six, seven, eight points there. The effort was there, though. They were trying.”

Mitchell’s three-pointer and Hazley’s 15-foot jumper gave West Memphis a 5-0 lead out of the gates before Bartlett tied things up 11-11 at the end of the first quarter.

Brown shuttled players in and out of the game in the second quarter, but the Blue Devils still managed to take a 30-23 lead into halftime.

The Blue Devil boss went back to his starting five to open the second half and the execution immediately began to click as the hosts ran up a 46-34 lead after a layup from Deon Williams with 52 seconds left in the third quarter.

Brown said he intentionally set his team’s first regular-season game just 48 hours after the preseason skirmish. “I wanna see how these guys respond to playing games so close together because that’s what we’ll face in the state tournament,” he commented. “I want the guys to understand how to recover and take care of their bodies.”

Thursday night’s junior varsity game will begin at 6 p.m., followed by the varsity.