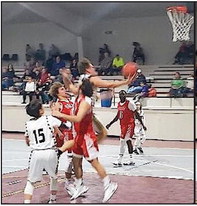 Delta Academy too much for West Memphis Christian in hoops action

The Delta Academy Red Raiders lived up to their nickname plundering the West Memphis Christian School Black Knights in the basketball season home opening game Tuesday night at Trinity Baptist Church. The boys from Marks, Mississippi poured it on during the first half nearly shutting out the home team. The half-time score favored Delta Academy 38-4.

Black Knights coach Josh Pardue said it was a tale of two halves for both the boys squad and the girls team.

“The boys came out in the third quarter and really showed determination,” said Pardue. “It was good to see after the first half.

We are a young team. A lot of new players are getting to know each other.

We came out of the locker room to establish a new identity.”

Zane O’Quien, Aaron Key, and Sam Ritter each slashed the lane hard displaying gritty determination in the third period. Whit Key took on ball handling and shot well in the paint to finish the game.

The offensive tempo really picked up in the third but the ball hawking Raiders remained aggressive on defense and found too many opportunities to steal and transition to the fast break. Both coaches cleared the bench for fourth quarter play. The West Memphis Christian School boys succumbed to the Raiders’ onslaught, losing 22 to 70. While the boys turned out hard in the third, the lady Knights played it close until half-time and then fell flat. Trailing by four at half, 18-22, the Lady Knights lost with the Raiders going away.

For the Ladt Knights, the loss can be looked at as a learning experience for the rest of the season.