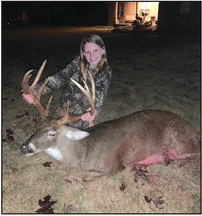 Marlee Williams is just 10 years old, but her small stature didn’t keep her from making a big kill to bring down her first deer.

According to dad Jason Ray, Marlee scored a 30yard shot from a ground blind while hunting in St. Francis county on Crowley’s Ridge, using a single-shot .243 “This was her first deer she has ever killed,” said Ray. “She and I hunted Saturday evening at another stand location. When we left, I set up a new ground blind on a food plot I had been getting some good deer on.”

The spot proved to be a winner.

Ray said she “put away her iPad” and looked up to see the deer.

“I was sitting in the back of the blind behind her, so I had to lean up to see him at first, and I told her ‘that’s the big 11 we had on camera,’” he said. “Turns out he was a big 14 point. The deer came in to the food plot right in front of the blind at 30 yards, keeping his eyes on us the whole time. He started to walk away and I bleated at him and he quickly stopped and looked our way.”

Marlee had a little trouble getting the big buck in her sights.

“She couldn’t get him in the scope,” said Ray. “As he started to walk away, she got him in the scope and off he went. We trailed him for about 50 yards before deciding to back out and let a dog do the work.

The rest is history.”

Ray said he plans on having ol’ Papa Duck mount the trophy buck.