Red Wolves look to get bowl eligible against Chanticleers 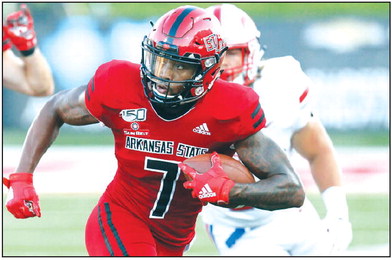 The Red Wolves have won their last two games to jump back above .500 and pull them within one victory of becoming bowl eligible for the ninth consecutive season and 12th time over the last 15 years.

With a 3-2 league record, A-State also sits one game behind Louisiana in the Sun Belt’s West Division.

Coastal Carolina started the season 3-1, including a victory over Big 12 member Kansas, but has dropped four of its last five games to run its record to 4-5 entering Saturday’s game.

The Chanticleers are currently in fifth place in the Sun Belt’s East Division with a 1-4 league mark.

Arkansas State holds a 2-0 record against Coastal Carolina as the two programs are set to meet for just the third time. The Red Wolves claimed a 51-17 win in Jonesboro in 2017 before going on the road to knock off the Chanticleers 44-16 last season. A-State has outscored Coastal Carolina 95-33 in the two games combined.

Arkansas State has won 54 of its last 68 Sun Belt Conference games (.794 winning percentage) to run its all-time record in the league to 86-50. The Red Wolves hold their most all-time victories against ULM with 27. A-State has defeated every team in the conference since the football league was formed in 2001. Along with ULM and Louisiana, A-State is one of three teams that have been a part of the conference since its inaugural football season.

An A-State victory would improve its all-time record against Coastal Carolina to 3-0, give the Red Wolves a winning record through 10 games for the ninth consecutive season, and move Blake Anderson into sole possession of the second most Sun Belt Conference victories among the league’s all-time head coaches.

Since 2000, Bayless is one of just seven FBS players to post at least 66 receptions, 1,168 receiving yards and 13 receiving touchdowns through nine games or less. Among the others are Biletnikoff Award winners Larry Fitzgerald (Pitt, 2003), Michael Crabtree (Texas Tech, 2007), Justin Blackmon (Oklahoma State, 2010) and Brandin Cooks (Oregon State, 2013). The other two are Josh Doctson (TCU, 2015) and Rashard Higgins (Colorado State, 2014).

Saturday’s game will appear on ESPN+, and every Red Wolves football game can be heard live on 107.9 FM in the Northeast Arkansas area. The live radio broadcast can also be accessed on the official A-State Athletics web site (AStateRedWolves.com) and the A-State Athletics app.