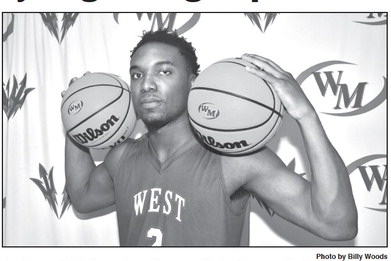 WM School District As the latest in a long line of super star basketball players from West Memphis, Chris Moore is aware of his place in Blue Devil lore.

But the 6-foot-7 forward doesn’t want to think too hard about it.

“I think about it sometimes, but I don’t want to get above myself,” said Moore. “But being put in that category with the greats and playing in this great Lehr Arena…it’s truly a blessing.”

Moore is the first known four-year West Memphis boys basketball player and his final season is now upon him. The Blue Devils play their first competition of the season on Tuesday night with a benefit game at Lehr Arena against Bartlett.

The first three years have flown by, according to Moore.

“I can’t believe it,” he said. “It’s been an amazing four years, honestly.”

His exploits on the court have taken him all over the U.S. on the EYBL circuit, where he has established himself as one of the top 75 Class of 2020 prospects in the nation.

Moore will soon end the suspense that his hometown has experienced, following his college recruitment. Moore said he will either announce his college choice between Nov. 15 and 20.

His list of schools is down to just three: Memphis, Arkansas and Auburn, in no particular order.

Of the five official visits Moore is allowed to take per NCAA rules, the West Memphian has taken OVs to just the three aforementioned colleges.

He has been seen on a regular basis on the front row behind the Memphis Tiger bench at FedExForum the last two years and U of M head coach Penny Hardaway and assistant coach Tony Madlock have doggedly pursued the Blue Devil great, visiting practices in town.

But Arkansas’ new head coach, Eric Mussellman, has impressed Moore since he was hired to take over for Mike Anderson last spring. Rumors abound about a number of high-profile Arkansas high school basketball prospects following Moore to Arkansas should the Blue Devil decide to sign with the Razorbacks.

Pearl has made multiple scouting trips to West Memphis to see Moore play.

“Narrowing the list down to three schools was a very tough thing for me to do,” said Moore, who averaged 18 points and 16 rebounds last year for the 25-6 Blue Devils. “I’m officially done with the visits. I’m breaking it down, listing the pros and the cons with each college. It’s all going to be about what’s the best fit for me.”

As for plans on the big day of announcement, Moore said he’s got an idea what it will entail.

“There will be a ceremony at the (Performing Arts Center) on campus,” he said. “I’m gonna make it dramatic. I will have (hats for) all three colleges there…uh, yeah, we got something coming.”

And with what goes with being a high-profile basketball prospect and in keeping with the culture that surrounds high school athletics today around the U.S., Moore said he has been propositioned by a few schools, which have tried to entice him to transfer.

“I don’t like to leave anywhere when there’s unfinished business to take care of,” Moore stated. “I think I owe this city and community a ring, and I’m going to try my best this year to get it.”

As Moore alluded to, his ascension to the high school ranks in the ninth grade seems a short while ago.

“I remember that feeling like it was yesterday,” he said. “It was scary. My first game we played somewhere in Memphis and it was sold out that game.

As a kid you always think of the worst and you don’t want to upset anybody, especially the coaches and the guys you’re going to be playing with. I played pretty good that night, but I was very jittery.”

Moore said his greatest moment as a Blue Devil was playing in the state championship game his sophomore year in 201718. Although West Memphis lost to Jonesboro that day, the atmosphere resonated with Moore.

“It was just a fun feeling playing for the state championship,” he said. “Jonesboro got off to a great start, but then we built a pretty big lead (13 points) in the second quarter. And that’s when (Jonesboro’s) Tony (Hutson) got hot.”

Moore was on his way to being a two-sport star at West Memphis, but he tore his meniscus in the seventh-grade playing football.

“I would have been a great receiver, tight end type,” said Moore. “As a kid, even though I did a lot of running, I played football mainly to keep me in shape.”

He’s glad, however, he focused solely on hoops.

“I have learned so much about the game of basketball from Coach Marcus (Brown),” Moore commented. “He’s taught me how to break the game down and how to become the player that I should be.

But I’m also thankful to have played for the legendary Coach (Larry) Bray.”

As for the passion Moore has for the game, it is very visible no matter if he’s playing summer ball, high school ball or just in practice. It’s the biggest selling point he has, according to college coaches.

“Every time I hear the word basketball I get a little jittery. It’s the most funnest thing in the world to me…I know funnest is not a word, but I’m making up a word,” Moore quipped with a grin. “I spent a lot of time with (former Blue Devil great and current pro) Sonny Weems last summer and we talked about how this big round ball can take you anywhere you want to go in the world. It can give yourself a life.”

Pro basketball is definitely on Moore’s radar for the future.

“I’d do almost anything to get there,” Moore stated. “I will draw a line, however, because there are some things that you shouldn’t do. But pro ball is definitely on my bucket list. Right now in high school I’m trying to get league-ready.

I think my body is college- ready, but I’m trying to go to the level after that, too.”