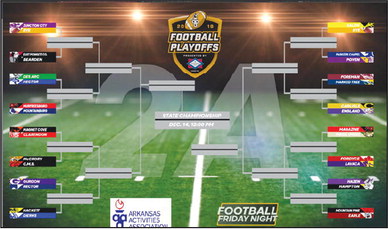 The 2019 regular season is in the books, and the Road to War Memorial begins Friday, Nov. 15 for Arkansas football teams, including three Crittenden County squads with championship aspirations.

The Earle Bulldogs lost to Carlisle last Friday night 64-46. The loss sent the Bulldogs tumbling all the way down to the number 4 seed in District 6 of the 2A tournament bracket.

After deep playoff runs the past two seasons, Earle will have to turn things around after a sluggish finish to the regular season. The Bulldogs will be back in action on the road in the first round against the Mountain Pine Red Devils this Friday. The Red Devils are the number 2 seed out of Region 5, so it will be a real test for the Bulldogs.

The West Memphis Blue Devils struggled early in the season, but the team finished strong. The Blue Devils easy win over the Mountain Home Bombers this past Thursday night, earning a first-round bye in the Class 6A State Tournament.

With a week off to rest and prepare, West Memphis will be back in action on Friday, Nov. 22, taking on the winner of this Friday’s first-round playoff game between Sylvan Hills and Lake Hamilton. Game time is 7 p.m. next Friday at Hamilton-Shultz Field.

The Marion Patriots beat the Jonesboro Hurricane this past Thursday night, coming from behind to upend the Hurricane and grab the number three seed in the playoffs. Although the Pats and Devils ended up with the same record, West Memphis gets the bye by virtue of their head-tohead win over Marion. Up next for the Patriots is a first-round playoff game in the 6A State Tournament, as Marion hosts the Siloam Springs Panthers this Friday. Kick-off is scheduled for 7 p.m.