Hicks set for return to Beatles on the Ridge 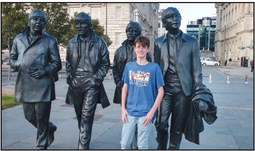 Local young musician to play at celebration of the Fab Four

Seventeen-year-old, West Memphis, Arkansas, native Cameron Hicks has been playing for crowds since he was twelve, and has become a fixture at the Beatles At The Ridge Festival in Walnut Ridge, Arkansas.

Cameron has played many local, solo shows, and he’s played intermission sets for established Memphis band, Vintage. He freely donates his time to play for local charity causes as well being a regular member of his church’s youth band. He has competed in piano competitions for 4-H as well as the Chicago Fest for Beatles Fans. He won the Beatles at the Ridge Talent Show in 2015 with his electric guitar performance of “Blackbird,” which earned him the opening act slot for GRAMMY-nominated Liverpool Legends. At the age of 13, he performed on stage with author Lanea Stagg at the GRAMMY Museum in Mississippi. Most recently, he has teamed up with Marion native, Vivie Myrick, to form the singing duo “In Between.” They are just coming off their show at the Delta Fair in Memphis. Cameron can also add “composer” to his list of credits as he recently scored the music for “Prom Works Out,” student filmmaker Graham Brewer’s entry in the Memphis Indie Youth Film Festival.

After first being invited to be a guest performer with author Lanea Stagg in 2015, 2019 marks Cameron’s fourth year of being a featured performer at the Walnut Ridge “Beatles at the Ridge Festival” Authors and Artists Symposium.

The theme of this year’s symposium is Beatles Memorabilia. With several nationally known authors attending to give presentations on Friday and Saturday, this free festival is certainly not something to be missed.

Cameron will be performing during the Meet and Greet portion of the symposium on Friday afternoon, Sept. 20, from 3:30 to 4:15 p.m. when he will be performing an acoustic set of the North American Capitol Records Soundtrack to the Beatles film “Help!”