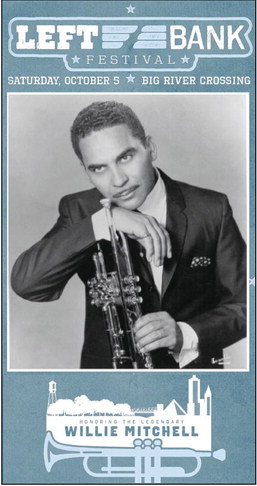 www.asumidsouth.edu Any city can host a music festival, and many do. But very few cities can host a festival that boasts the musical heritage of West Memphis, AR. From its juke joints to the Plantation Inn, from the legendary radio careers of Johnny Cash and Howlin’ Wolf, West Memphis was the starting point for many American music legends. The Left Bank Festival presented by Southland Casino Racing and the City of West Memphis, is scheduled for October 5th at Big River Crossing and celebrates one of those legends, Willie Mitchell.

The Left Bank Festival, begun last year, is produced by the Foundation supporting Arkansas State University Mid-South and all proceeds are used to support scholarships for the ASU Mid-South Greyhound student-athletes.

This year the event honors the late Willie Mitchell, with a special salute by original members of the Hi Rhythm Section, with special guest vocalist, Don Bryant. In addition to music, the Left Bank Festival also features a 5k/10k run sponsored by Baptist Memorial

Hospital- Crittenden and Fenter Physical Therapy, a Delta Pride Catfish Cooking Competition, area arts and crafts and family fun. Willie Mitchell was the band leader at the Plantation Inn and helped introduce Soul and R& B to the predominantly white audiences from the Delta.

He went on to become a world class producer for Hi Records launching the careers of Al Green, Ann Peebles, and more. His Royal Studios in Memphis is still the oldest continually operating recording studio in the U.S. producing the same tight sound that Mitchell created, the sound that gave Uptown Funk its groove, and that hosts such greats as John Mayer and Robert Cray.

The Grammy Nominated Hi Rhythm Section was the house band for Willie Mitchell’s Hi Records label in the 60’s and 1970’s.

They are the band that played on all of Al Green’s hits, and those of Ann Peebles, O.V. Wright, Otis Clay and Syl Johnson.

Backed by the Hi Rhythm Section, Al Green would become one of the first African Americans to sell millions of albums as well as singles. The band included the three Hodges brothers: Charles Hodges on organ, Leroy Hodges on bass, and Mabon “Teenie” Hodges on guitar; together with keyboard player Archie “Hubbie” Turner and drummers Al Jackson Jr. & Howard Grimes.

In 2016, the group was inducted into the Memphis Music Hall of Fame and in 2017, they received the Lifetime Achievement Award from the Americana Music Association.

In 2018, they were nominated for a Grammy for Best Contemporary Blues Album with Robert Cray.

Don Bryant began singing when he was 5. He joined his father’s family vocal group, then formed a gospel quartet for a high school radio gig. Broadcasting broadened the audience and the quartet went secular, singing pop at WLOK on Dick “Cane” Cole’s popular show.

Later, taking a very real step toward careers, they became the Four Kings and began collaborating with Willie Mitchell’s band, the “swingingest, groovin’est” band in the Memphis-Mississippi- Arkansas area — the American music floodplain. Willie’s band was known for instrumental

they’d play at Danny’s in West Memphis, Don’s group fronted them. The Four Kings broke up and Mitchell, who was touring concert venues and dance halls, needed a vocalist who could play with his supple, slinky funky beats. Mitchell anointed Don Bryant as his leading man.

Bryant is married to Ann Peebles, another famous recording artist on the Hi Records label.

“We feel very fortunate to have this amazing, legendary talent at this year’s event. This once-in-a-lifetime concert experience on the banks of the river, is even more significant because West Memphis is so much more than a footnote to Memphis music. West Memphis is the origin and foundation of the Memphis sound,“ said Dr. Debra West, Chancellor of ASU Mid-South.

West Memphis city officials plan to officially honor the late Willie Mitchell at the event with a presentation to his son, Lawrence “Boo” Mitchell who is helping to produce the music event. The event is free to the public, with fees to participate in the race, the catfish competition, and for food and craft vendors.

Applications to participate are available on the festival web site, as well as more information and schedule of events can be found at www.leftbankfestival.com.