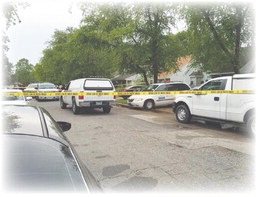 ralphhardin@gmail.com More than three years after the fact, the Marion Police Department is still investigating the death of a local teenager.

On April 29, 2016, police and emergency crews responded to a residence on Sherwood Street in response to a call about and unresponsive male, later identified as 16-year-old Jacameron Macklin.

Emergency crews received the call around 4 p.m., after the boy was found by his mother. Upon arrival, Macklin was checked by emergency crews, but was pronounced dead on the scene, from an apparent gunshot wound.

Although he lived in Marion, Macklin was a sophomore at the Academies of West Memphis. Classmates held a candlelight vigil, the Marion Police Department investigated the shooting from a variety of angles. A few leads were followed.

Det. Freddy Williams, who was the lead investigator at the time, even said “a possible person of interest” had been developed after speaking with neighbors, but no suspect was ever officially named.

Now the case is in the hands of Det. Paul Turney.

Turney recently attended a “cold case” training session and is looking to put those newly acquired ideas to work on this and other unsolved cases for the department, an idea Marion Chief of Police Gary Kelley is eager to put into action.

“This investigation began on Friday, April 29, 2016, and to this day, no arrests have been made in regards

to this case,” said Kelley.

“It’s our hope that we can take that and work the case from a new approach, and it will give us some new leads. We’re still hoping someone will come forward, maybe offer some new information.”

“Marion detectives have received specialized training in different fields of forensic sciences. Some of these include blood splatter analysis, crime scene reconstruction and interpretations, and cold case investigations. Our detectives continue to examine the details of this case and will continue to do so until this case is solved.”

Kelley added an appeal to the community.

“I would encourage any person with knowledge of this case to contact the Marion Police Department and speak with one of our detectives.”

Police are asking anyone with any information about the incident or any possible suspect or suspects to call the Marion Police Department at (870) 739-2101, or Crittenden County Crime Stoppers at (870) 732- 4444. There is a reward of up to $2,000 for information leading to an arrest. All calls will be kept